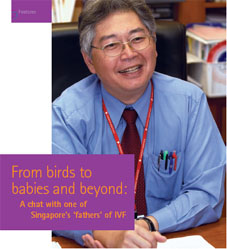 From Birds to Babies and Beyond:

A chat with one of Singapore's "father" of IVF

Professor Ng Soon-Chye is an internationally-renown specialist in the area of Reproductive Medicine.

He graduated from the University of Singapore (NUS) in 1974, obtained the specialist degree in Obstetrics & Gynaecology and became a member of the Royal College of Obstetricians & Gynaecologists (RCOG) of London in 1981 . He then started his first in-vitro fertilization program in Singapore in 1982. The result was Asia 's first test-tube (IVF) baby, delivered in May 1983.

In 1989, he developed the first SUZI (sub-zona insemination) baby in the world. This was a revolutionary technique at that time, whereby weak sperm was injected directly under the shell (zona pellucida) of the egg, to enable fertilization. The baby born was the first in the World from a micro-injection technique.

In 1993, he did the first ICSI baby in Asia . This is an extension of the SUZI technique, whereby the sperm is injected directly into the egg proper.

Professor Ng served in the NUS from 1977 to 2003 and concurrently in the National University Hospital (NUH) from 1986 to 2003 (from 1977 to 1985, he was in the University Unit of the old Kandang Kerbau Hospital ). He obtained his professorship in December 1993, and from 1997 to 2001 became the Chairman of the Department of O&G in NUS and Chief of O&G in NUH. He was also Chairman of the Committee of O&G, Graduate School of Medical Studies in NUS from 2000 to 2002, during which period he was in charge of the O&G post-graduate training.

He is currently in private practice, as a senior consultant in O&G Partners Clinic for Women and O&G Partners Fertility Centre in Gleneagles Hospital .

He also serves as an advisor to the Ministry of Health when there are issues related especially to infertility .

His special interest is infertility (including male infertility) , gynaecological laparoscopy and hormonal disturbances.

He holds an adjunct professorship in the Dept of Obstetrics & Gynaecology, National University of Singapore, and in the School of Biological Sciences , Nanyang Technological University , where he lectures Development Biology.

For his pioneering work in Reproductive Medicine, Professor Ng received the following awards :

In 1997, he received the Outstanding University Researcher Award, NUS

Professor Ng has had a deep interest in nuclear transfer, and has spent nine months of sabbatical in the Wistar Institute, Philadelphia with Prof. Davor Solter working in this area. He developed the technique of sub-zonal sperm transfer with micro-manipulation, which resulted in the birth of the first SUZI baby in the world in 1989.

His current research is nuclear transfer and reprogramming, with the monkey as the model. This model is critical to human SCNT (Somatic Cell Nuclear Transfer), as it is not possible to utilize human cells for SCNT experiments currently. His team has managed to achieve early pregnancies of both the Cynomolgus monkey and the Lion-tailed Macaque ( Macaca fascicularis and M. silenus resp.) but all miscarried by mid-pregnancy; inspite that, this is the most advanced research on SCNT of non-human primates (Development, 2004). The current research includes determining the basic cellular and molecular processes to optimize SCNT in non-human primates. His team hopes to obtain embryonic stem cells from reconstructed non-human primate embryos, to develop into neural stem cells; other target cells include insulin-producing cells and hepatocyte precursors.

He currently leads 2 research laboratories involved in such research, one in the National University of Singapore, and the other in the Nanyang Technological University . He currently holds three patents, one on SCNT in primates.

Professor Ng is also active in research involving umbilical cord stem cells. This work is in collaboration with the Department of Electrical Engineering in NUS. A novel “placental pump' has been designed and patented.

Professor Ng also has an extensive list of his own publications, mainly in the field of human embryology and in-vitro fertilization, especially micro-injection.

Professor Ng's other main interest is in wildlife, especially bird-watching and video-taping the birds. He was the President of the Nature Society in Singapore from 1995 to 1997.

He has produced a few amateur wildlife documentaries during his spare time. He also hopes to help wildlife conservation by applying the nuclear transfer techniques to endangered wildlife such as the Lion-tailed Macaque.